A Guide To Women’s History Month 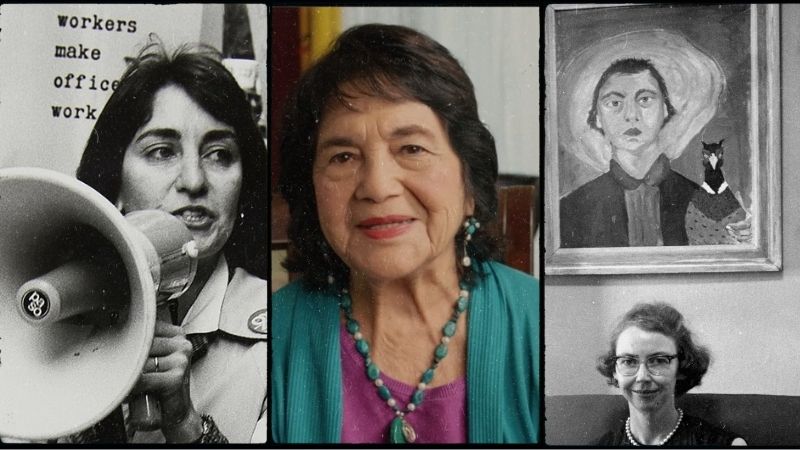 Your local PBS stations – ThinkTV and CET – are celebrating National Women’s History Month! Celebrate with us by checking out some of the awesome PBS specials that highlight the influential role women have played in shaping history. Some of these shows are airing on broadcast, while others are free to watch via the PBS Video App or online, and a few are only available to members with Passport. Take a look:

Explore the life of Flannery O’Connor whose provocative fiction was unlike anything published before. Featuring never-before-seen archival footage, newly discovered journals and interviews with Mary Karr, Tommy Lee Jones, Hilton Als and more.

Explore legendary choreographer Twyla Tharp’s career and famously rigorous creative process, with original interviews, first-hand glimpses of her at work and rare archival footage of select performances from her more than 160 choreographed works.

Louisa May Alcott: The Woman Behind Little Women is the first film biography about the celebrated author and reveals a remarkable woman, ahead of her time, who was much more than a writer of children’s books. Watch anytime anywhere with Passport: https://video.thinktv.org/video/louisa-may-alcott-the-woman-behind-little-women-tcqeqd/.

When Dolly Parton sang “9 to 5,” she was singing about a real movement that started with a group of secretaries in the early 1970s. Their goals were simple—better pay, more advancement opportunities and an end to sexual harassment—but as seen in 9to5: The Story of a Movement, their fight that inspired a hit would change the American workplace forever. Watch the special now online: https://video.thinktv.org/video/9to5-the-story-of-a-movement-1ljxcl/.

Join ThinkTV, CET and our partners for a live discussion and Q&A with Dayton-area Academy Award-winning filmmakers Julia Reichert and Steven Bognar and meet the trailblazing women featured in the documentary film, Tuesday, March 9, at 7pm. RSVP here: https://thinktv.org/free-virtual-9to5-event/.

Georgia O’Keefee: A Woman On Paper
Sunday, March 28, at 3pm on ThinkTV16

Georgia O’Keefee: A Woman on Paper highlights the artist’s career while focusing on the little-known story of O’Keeffe’s time spent in Columbia, S.C. as an art instructor at Columbia College. While teaching at the college in the fall of 1915 and the spring of 1916, O’Keeffe found her voice with a series of innovative black and white abstract charcoal drawings that represented a radical break with tradition and led her art-and her career-in a new direction.

Contralto Marian Anderson performs at the Lincoln Memorial in Washington, D.C., on Easter Sunday in 1939 after being barred from singing at Constitution Hall by the Daughters of the American Revolution (DAR).

One hundred years after the passage of the 19th Amendment, The Vote tells the dramatic culmination story of the hard-fought campaign waged by American women for the right to vote — a transformative cultural and political movement that resulted in the largest expansion of voting rights in U.S. history.

Exploring how and why millions of 20th-century Americans mobilized for — and against — women’s suffrage, The Vote brings to life the unsung leaders of the movement and the deep controversies over gender roles and race that divided Americans then — and continue to dominate political discourse today.

Unladylike2020: The Changemakers, narrated by award-winning actor Julianna Margulies (ER, The Good Wife, Billions), and featuring the voice of Lorraine Toussaint (Selma, Orange is the New Black, The Glorias) is part of PBS’ 2020 summer celebration of women trailblazers. This hour-long documentary focuses on political change, examining the ways women accomplished amazing milestones over 100 years ago, overcoming incredible odds and great resistance, to map a national future of equality and to improve life for Americans. It features the rich biographies of five little-known trailblazers, including some of the first women to hold elected office, and women who fought to ensure that citizens are treated equally and protected by the same rights.

With intimate and unprecedented access, Peter Bratt’s Dolores tells the story of Dolores Huerta, among the most important, yet least-known, activists in American history. Co-founder of the first farmworkers union with Cesar Chavez, she tirelessly led the fight for racial and labor justice, becoming one of the most defiant feminists of the 20th century. Watch now with Passport: https://video.thinktv.org/video/dolores-jhnajm/.

American Masters “How It Feels To Be Free”

A documentary that tells the inspiring story of how six iconic African American women entertainers – Lena Horne, Abbey Lincoln, Nina Simone, Diahann Carroll, Cicely Tyson and Pam Grier – challenged the entertainment industry deeply complicit in perpetuating racist stereotypes, and transformed themselves and their audiences in the process. Watch the special with Passport: https://video.thinktv.org/video/american-masters-how-it-feels-to-be-free-zzfh8i/.