All Creatures Great and Small: Between The Pages and Season Two

Home » Blog » All Creatures Great and Small: Between The Pages and Season Two 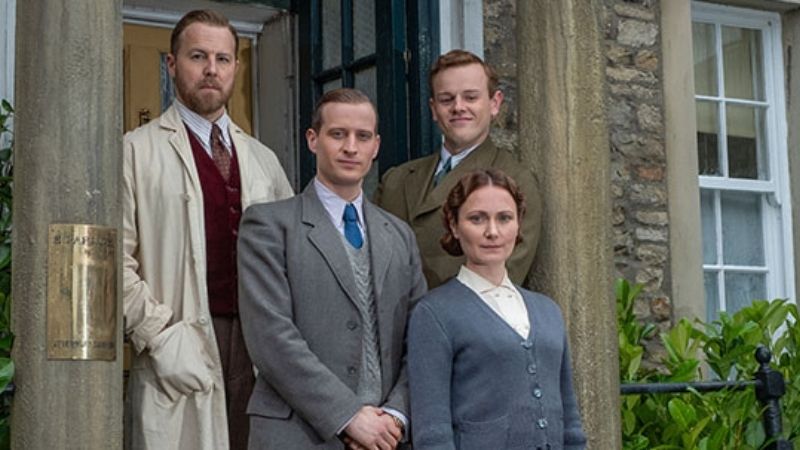 Based on James Herriot’s beloved books, All Creatures Great and Small turned out to be the feel-good series of last winter, generating both large audiences and terrific reviews. Now we’re looking forward to a behind-the-scenes membership special and Season Two!

First, a bit about the membership drive special, All Creatures Great and Small: Between the Pages.

All Creatures Great and Small: Between the Pages transports viewers behind the scenes of the hit series that captures the warmth, down-to-earth wit and generosity of spirit that infused Herriot’s iconic characters and novels. The program features the best moments from the series and interviews with the cast and creators provide insights and reflections on this timeless, life-affirming story.

Between the Pages includes interviews with cast members Anna Madely (Mrs. Hall), Nicholas Ralph (James Herriot), Rachel Shenton (Helen Alderson), Samuel West (Siegfried Farnon) and Callum Woodhouse (Tristan Farnon), as well as the talents behind the series, including executive producers Colin Callender and Melissa Gallant, lead director Brian Percival and lead writer Ben Vanstone. The program also takes a look back at Dame Diana Rigg in her final role as the delightfully eccentric Mrs. Pumphrey, reveals what it’s like to work with the animals, explores the love triangle that provided laughter, tears and romance, and visits the timeless set of this sweeping drama. Viewers will be able to reminisce of the fond memories of Season 1 and learn what to expect in Season 2 from the cast members themselves.

All Creatures Great and Small: Between the Pages premieres Sunday, August 15, at 7:30pm on CET, ThinkTV16, both stations livestreams and on the PBS Video App.

Here’s What We Know About Season 2 Right Now… Warning Season 1 Spoilers Ahead!

In Season Two, Ralph returns as James Herriot, a young vet from Scotland who moves to Yorkshire to take a job in a local veterinary practice in the farming town of Darrowby. The cast also features West as James’s charismatic but eccentric boss, Siegfried Farnon; Woodhouse as Siegfried’s womanizing and carefree younger brother, Tristan; Madeley as Mrs. Hall the wise and compassionate housekeeper who becomes a surrogate mother to the three men in her charge; and Shenton as the independent-minded and alluring farmer Helen Alderson who becomes the focus of James’ attention. Lewis also returns as Helen’s former fiancé, Hugh Hulton. Patricia Hodge (A Very English Scandal) joins the cast as Mrs. Pumphrey, owner of the overly indulged Pekingese Tricki-Woo. The role of the doting dog-owner was played by the late Dame Diana Rigg in Season One. It was Dame Diana’s last on-screen role in a career spanning more than sixty years, before her death in September 2020.

The climax of Season One saw Helen call off her impending wedding to wealthy landowner Hugh, having developed a close friendship with James. After working hard to become accepted by the local farmers and prove himself indispensable, Siegfried made James a senior vet in the Skeldale House veterinary practice. Following years of half-hearted effort, Tristan believed he had finally passed his veterinary exams. Siegfried, however, learned that Tristan failed once again, but didn’t have the heart to tell him. Meanwhile, Mrs. Hall was heartbroken when she was unable to reconnect with her estranged son.

As Season Two opens, James returns from Glasgow where he has been visiting his parents for Easter. While there he is offered a job at a modern local veterinary practice and must decide between staying home in Glasgow with his elderly parents or returning to his new life in Yorkshire.

Season Two of All Creatures Great and Small will consist of six episodes, plus a Christmas special. MASTERPIECE on PBS is the co-producer and All3Media International is the international partner. Based on Season One, American viewers likely won’t see Season Two until at least January of 2022 if not later.