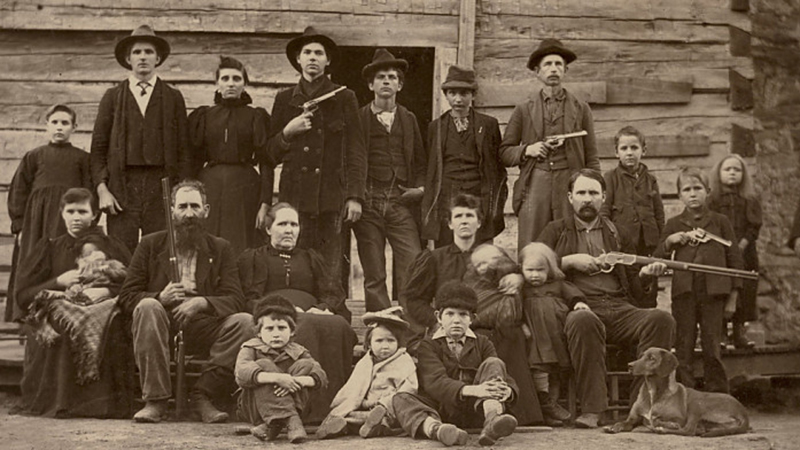 Discover the real story behind the most famous family conflict in U.S. history — the battle between the Hatfields and McCoys – with American Experience: The Feud. Much more than a tale of two warring families, the film, which premieres Tuesday, September 10, at 9pm on CET and ThinkTV16, goes beyond the myth to show the forces that ignited the feud.

The Hatfield-McCoy feud evolved into a mythic American tale of jealousy, rage and revenge – and one which helped create the negative “hillbilly” stereotype that has shaped attitudes towards Appalachia for more than a century. Yet the truth is much more than a tale of two warring families. It is the story of a region and its people forced into sudden change by Eastern capitalists, who transformed Appalachia from an agrarian mountain community into a coal and timber producing workplace owned and run primarily by outside interests.

Deep in the rugged and remote mountains of Central Appalachia, the Tug Fork Valley was the edge of the American frontier in the early 1800s. The Hatfields and the McCoys were among the earliest white settlers in the valley, inhabiting both sides of the Tug Fork, which formed the border between Kentucky and Virginia (later West Virginia). Like most families in the area, the Hatfields and McCoys eked out a living by farming the narrow and steep hollows and foraging for game and wild edibles in the surrounding forests.

After the Civil War, which had divided loyalties in the region and created the new state of West Virginia, Tug Valley residents worked to rebuild their community. With industrialization increasing at a breakneck pace, investors began eyeing Central Appalachia for its natural resources. Industrialists saw the pristine forest not as a source of life and livelihood, but as the promise of great wealth.

Anderson Hatfield also saw new opportunities. He started his own timber company, and, despite being illiterate, proved to be a savvy and opportunistic businessman, hiring relatives and neighbors to man his crew. His workers floated logs down the Tug Fork to the Big Sandy River and on to the Ohio where sawmills churned out the lumber that was building America. Randolph McCoy, who struggled to support his family of 16 children on his small farm, bitterly resented Hatfield’s success.

On a Kentucky Election Day in 1882, an altercation sparked a dramatic escalation in the tension between the two families. A fight broke out leading to the death of one of Anderson Hatfield’s brothers at the hands of three of Randolph McCoy’s sons. Anderson decided to take justice into his own hands. With the help of family members and employees, he captured the three McCoy brothers and executed them. The violence shocked the community and Randolph wanted revenge, but there was little effort to bring the Hatfields to justice.

On New Year’s Day 1888, the names “Hatfield” and “McCoy” became famous across the country. That night, a group of men, led by two of Anderson Hatfield’s sons, surrounded Randolph McCoy’s cabin, intending to kill McCoy. As a gunfight broke out, the attackers set the cabin on fire. Randolph managed to escape, but two of his children were killed and his wife was severely injured.

News of the brutal crime made national headlines. The press decried not only the violence, but the mountain people’s entire way of life. “I have been away in Murderland for nearly ten days,” wrote a New York City journalist who published An American Vendetta, the first book to tell the tale of the feud. “No one would believe that there is in this country such a barbarous, uncivilized and wholly savage region.” To outside industrialists and urban America, the people of Appalachia were seen as backwards, violent and an obstacle to progress, and characterizing local families as uncivilized and different became part of a justification for dispossessing many of the mountaineers from their land.

The Hatfields, McCoys and other mountain families found ways to adapt to the new economic and social order or moved out of Appalachia altogether. But the legacy of the feud remained. And the “hillbilly” image, popularized by reports of the Hatfield-McCoy feud, continues to permeate American popular culture.