An Episode in the Baking: A Day on the Set of The Baking Journal

Home » Blog » An Episode in the Baking: A Day on the Set of The Baking Journal 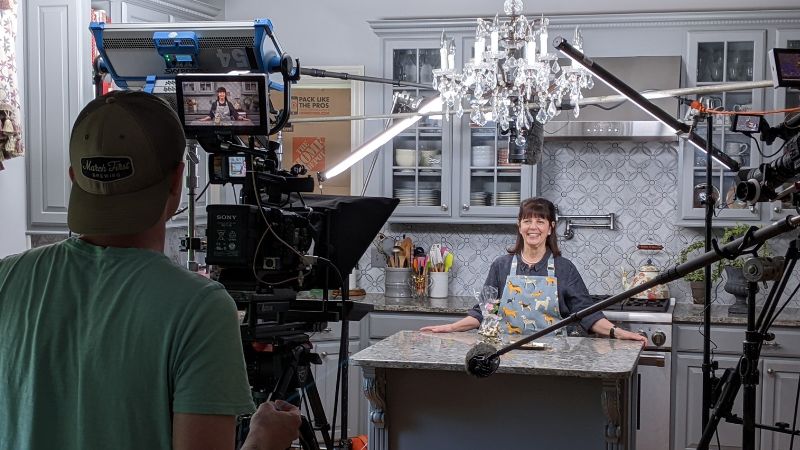 We are lucky to employ some amazing interns at CET and ThinkTV. This blog post was written by Nadya Ellerhorst following her first trip out on a shoot to help produce an episode of The Baking Journal. Enjoy!

It was a Tuesday morning and one of Stephanie’s Great Danes had just broken a potted plant. For the rest of the day, I had a lingering fear that I might do the same.

We had just arrived and were unloading equipment from the CET van to film The Baking Journal. It was my second week as a Communications and Production Intern, so I was coming to terms with the humbling experience of carrying what seemed like an endless amount of equipment into the kitchen (note to self: start lifting again). I’d just caught my finger in a tripod and was watching it slowly swell and purple to a shade probably similar to Stephanie’s violet-infused sugar when we were briefly stopped by a crash and an ensuing ruckus coming from inside.

Fortunately, the damage was minimal and necessitated a brief sweep, which Stephanie did with a smile. As we brought in equipment and set up, I briefly stopped to pet the dogs – like any respectable intern. 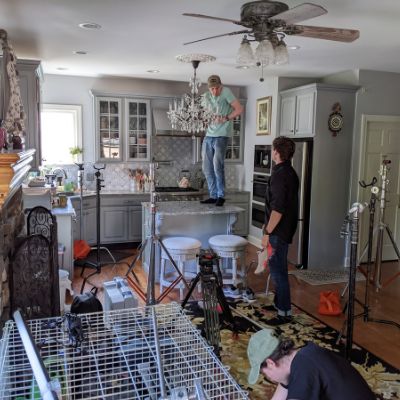 Stephanie’s home is lovely, but it’s full of glass, porcelain, marble and wooden things. As my colleagues begin setting up a complex combination of lights, cameras, chargers and cords – so many cords – I began to worry about recreating the unfortunate scenario that started our morning.

Naturally, one of the first things I’m asked to do is balance on a small step stool to clip curtains over the windows to ensure proper lighting, a table full of potted plants below me. 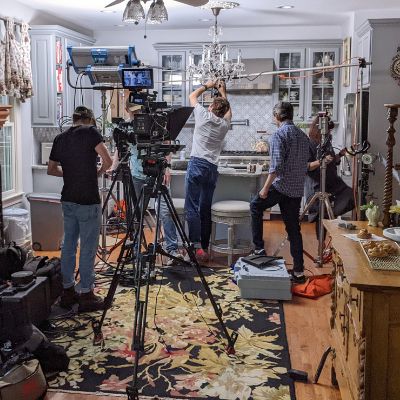 The team set up the massive array of intimidating equipment in the kitchen while, in the dining room, Stephanie worked on the script with the producers. I found myself right between the two scenes, basically with one foot in each room, helping either side where needed – as a Communications and Production intern, I’m used to it. I tried to be useful, but not in the way, which is hard when you’re a 6-foot-tall newbie on her very first location shoot.

One second I was helping to edit a script, the next I was digging through a storage bin full of various cables. When asked to fetch a given piece of equipment, the conversation usually boiled down to:

“Can you get me [complicated name of a piece of equipment]?” 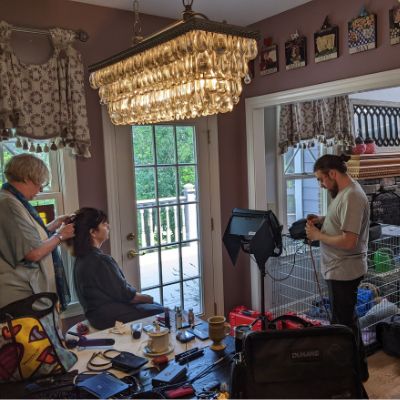 If you can’t tell by now, many, many things were occurring simultaneously. The process got a lot more standard once the cameras started rolling, but there was still a great deal of moving parts.

Like any seasoned television chef, Stephanie doesn’t bake the treats gracing your screen in real-time and filming is by no means chronological. That day, for a full-length episode, we filmed Stephanie mixing together ingredients to make dough. Instead of waiting for that dough to rise, Stephanie had prepared another batch in advance, which we swapped in, and while she demonstrated what to do with that dough (I won’t spoil it for you!), she already had a whole batch of the recipe finished and prepared. Once the recipe portion was filmed, we shot b-roll and introductions. Through it all, Stephanie ad-libbed her lines, which was impressive to watch. The script we wrote earlier was for the shorter “tips and tricks” videos, which we recorded that day too.

All the while, Stephanie’s make-up was touched up. The production team made slight adjustments to the equipment that I won’t even pretend to understand (yet). Batteries were replaced. Cameras were moved. Outside sounds interfered. In between takes, the crew told stories, discussed species of spiders and stared through the window at Stephanie’s bustling bird feeder. The house was so full of movement for a show that’s so serene in the end. 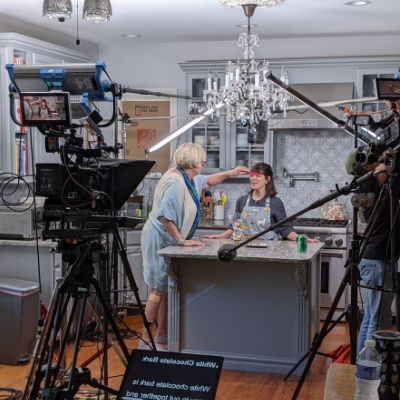 It’s truly the magic of television.

We arrived at around 9:45 and wrapped at 5:20. Some of the equipment stayed for additional days of filming, but we still had to clean up and the overall process was gradual and calculated, even amid what struck me as chaos in the morning (I still can’t wrap my head around those cords).

In any case, as an intern, I don’t think I did too badly. At the very least, they never resorted to locking me in the basement with the doggies (not that I would’ve complained). Aside from all of the insight into location shoots and a crash course in equipment – with no actual crashing involved, fortunately – I was likewise rewarded with a sack of white chocolate bark (episode pending). As if that weren’t enough, Stephanie handed me a box with a pumpkin roll (episode also pending) and a pear muffin. This will go great with the new weight lifting regimen! 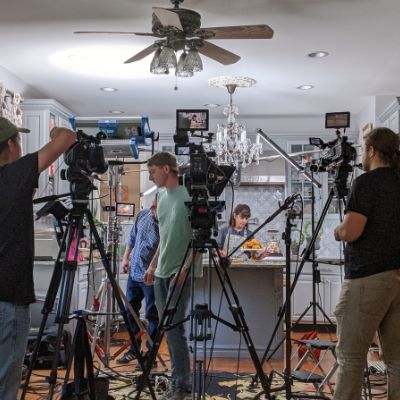 “It takes a village,” one team member jokingly tells me earlier in the day as we work together on the arduous task of plugging a cord into an outlet. It’s such a common phrase, but it retains a distinct weight in this context, and it’s one that I’ve heard repeated at Public Media Connect since then.

Although my time here has been limited thus far, be it in my cubicle, one of our studios or Stephanie’s kitchen, “it takes a village” seems like the unofficial motto. The final products created at Public Media Connect – yes, even baked goods – are the result of the work of a variety of people balancing a variety of tasks. Not to be overly on theme here, but it’s really like a recipe consisting of the talents of others that, with a little hard work, come together to create something brilliant.