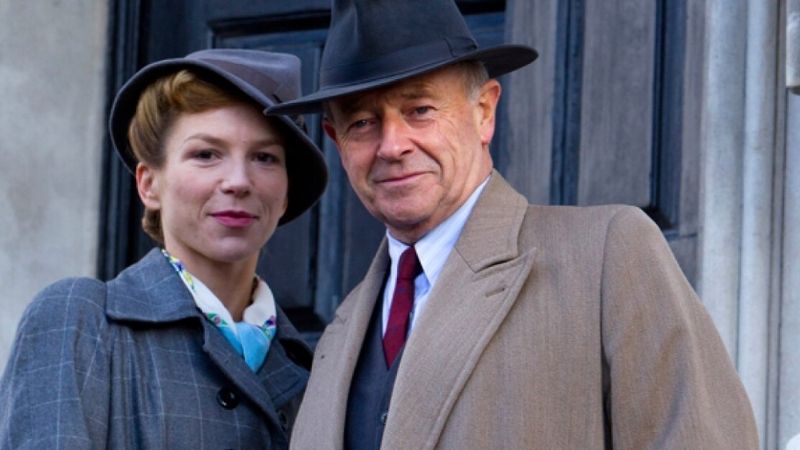 Do you know when they will start new Midsomer series?

April finds us on Season 18 and Season 19 starts on May 5. Both have aired here before. Season 20 will be brand new for Ohio and starts on June 23.

Just wondering what happened to Samantha Brown’s Places to Love on Thursday nights at 7:30pm on ThinkTV16. Are you not carrying her in that time slot anymore?  Has she been moved to another time slot on ThinkTV16?  We miss her program!

We’ve run through all of Samantha Brown’s Places to Love episodes many times and hope to restart it when a new season arrives. So we’ll give it a rest with Roadfood. Meanwhile, Places to Love continues on ThinkTV14 on Wednesdays at 10:30pm and Saturdays at 2:30pm.

We’ve been following Foyle’s War for several weeks and were disappointed that you did not carry it last weekend. Will you bring it back so that your viewers can see all the segments?

Like all of our prime time shows, Foyle was pre-empted for our March Membership drive (February 26-March 13). The series resumed on March 18. Understand that Foyle’s War and Death in Paradise (Thursdays at 8pm on ThinkTV14) are syndicated series for which we pay over and above our PBS dues. So these series rely even more on their viewers to become members and help pay their cost.

I was just watching the evening news report on my PBS station and saw a report on the pharma company created by the Sacchler family. I was horrified to see that company identified as “Purdue Pharma.” Sir, this family originally tried to incorporate their company under that name several years, in order to derive benefits from confusion of their company with the pharmaceutical school and science programs at Purdue University.

Purdue sued them and WON, in a case that required the charlatans to change the name of their company to anything, but to change it from Purdue as Purdue had incorporated that name decades ago and had sole rights to the name, since the founder of Purdue, John Purdue, had no sons, only daughters.  So there are no descendants carrying that name.  Further, there were no ancestors of the Sacchler family with that name who they might be trying to honor.  They were trying to build their company using confusion with Purdue’s Pharmaceutical school to give them enhanced credibility.

Purdue sued them again, but this time the judge ruled that that change was enough to prevent confusion with the Midwestern academic powerhouse.

He was clearly wrong. And you are also out of line to publish a story which casts dishonor on Purdue’s School of Pharmacy.

Your editors should do a better job. I hope that you will take the time tomorrow evening to apologize to Purdue University for the dishonor you placed on a fine academic institution, which, by the way, has an excellent school of pharmacy.

Thank you for your email, but you should just send it to the newscast you were watching.  If that was PBS NEWSHOUR…  viewermail@newshour.org.

If it was another newscast, you can always Google them and find a contact address.

As an aside, I’m not understanding the nature of your complaint. If it’s a matter of spelling, first be aware that the pharmaceutical company owners are the Sackler family, not the Sacchlers (yeesh, no irony here). And I’m not finding any history of the litigation you describe, so this sounds like a fish story that’s making even cats hold their nose. And the drug company IS “Purdue.”  Either that, or every media outlet from the NY Times to the Wall Street Journal to the Cincinnati Enquirer to the Philadelphia Inquirer to the Moraine Post-Dispatch Intelligencer Journal Gazette is spelling it wrong.

Besides, here’s what Purdue University provides as background material on their website:

The company co-founders used their middle names. No mention of the litigation to get the pharmaceutical company to change its name.

Finally, I’d say that IF the pharmaceutical company did, in fact, change their name from “Purdue” to “Perdue,” (and not seeing evidence of that), then they’d be hearing from Perdue Farms, the folks whose chicken products line the shelves in grocery stores nationwide.

THAT would have gone down in business history as an epic name change that took the Sackler family from the chicken frying pan into the fire!

Spoiler Warning for Sanditon below:

I am glad Sanditon returned to PBS…. great show, however, actor Theo James (he played Sidney Parker) did not return and it is such a disappointment. The show is not the same and won’t be unless he returns. I am aware his character passed away but he can return…. the wrong male was buried and Sidney Parker is alive but wandered off because he has amnesia. Eventually, he regains his memory. Please forward my comments to the UK PBS who writes/produces the show.

First, I’ll send you an address to forward your request.  But you don’t want me to slow things down as a go between.

Secondly, it’s my understanding that Theo James did not care to return.  Many actors, like Dan Stevens of Downton Abbey, simply want to go on to other roles and not overstay in any one role.  So he was written out with a car accident.

If James wanted to have a door left open for a return, then the writers would have accommodated him (and I’m spit balling here—if that’s not too indelicate a term given the period costume dramas) by having him sent on a long journey to tend to his beloved aunt’s winery in coastal France while she recuperated from a long illness.  Bingo, a return can be written in anywhere down the line!

Maybe things would have been different had the BBC originally not declined to renew Sanditon for another season. It was a hit in the States, but apparently ratings in the UK were not great (did Austen fans there bristle at the thought of anyone attempting to complete Jane’s unfinished story?). So maybe James had nibbles from producers and took off.

And really, the Brits aren’t going to besmirch the memory of Jane Austen with some cheap soap opera stunts like left for dead, amnesia, or magically emerging from a shower the morning after (“Wha…?  It was ALL A DREAM!!”).