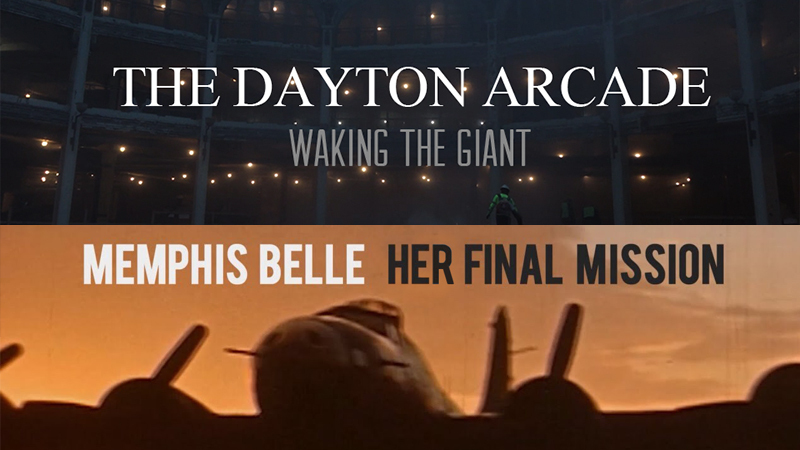 Recently, we conducted a question and answer (Q&A) session with our very own senior producer Richard Wonderling about his upcoming Emmy nominations for his work on The Memphis Belle: Her Final Mission and The Dayton Arcade: Waking the Giant (Part One). Wonderling has won more than 20 regional Emmys throughout his career and is currently wrapping up the final part of the three-part documentary The Dayton Arcade: Waking The Giant.

Learn more about Richard Wonderling and get insights into the production of the Emmy-nominated documentaries The Memphis Belle: Her Final Mission and The Dayton Arcade: Waking the Giant below.

Q: Congrats on the Emmy Nominations for both The Memphis Belle: Her Final Mission and
The Dayton Arcade: Waking the Giant (Part One)! Obviously, you’re still working on part
three of the Arcade documentary, but tell us what it was like to juggle these two major
documentaries?

A: I’m terrible at juggling — both physically and metaphorically. For me, the best way to
produce a major project is to get immersed and stay in that world throughout the
production. Of course, that’s a luxury we really can’t afford. Admittedly, it was difficult to
switch between the two documentaries. Once the momentum was building, and you were
really ‘feeling it’… you didn’t want to step away and move to the other project. But you had
to. Otherwise, one of the documentaries would be lying broken, on the floor.

Q: Which documentary had the most personal meaning for you and why?

A: I thought these were supposed to be easy questions! (laughs) Both projects were
about restoring a very significant icon to its former glory. Both featured teams who were
very passionate about their work. That made both stories appealing to me. My father was
in World War II and there’s just something about that generation and their story. It seems
like a couple times every century a generation is called upon to shoulder a terrible
burden. That’s meaningful to me and I have a lot of passion for telling the stories of that
generation.

Q: What was it like interacting with people whose lives were changed either by The
Arcade or by The Belle?

A: The documentaries mostly feature the restorers, the builders. It’s been pretty
inspirational to see the drive and the persistence of these individuals. They really believe
in what they’re doing. When you’re building something much bigger than yourself, I think
it changes you. Through their work, these people are touching the past, present and
future.

Q: When going into creating films like The Memphis Belle: Her Final Mission or The
Dayton Arcade: Waking the Giant, what is the creative process like? Where does it start
and how do you make it all come together?

A: You always start with curiosity. It’s your most powerful tool. It’s how you learn about
the story elements. You take that initial knowledge and drill down deeper. Once you know
most of the story elements, it becomes a question of organization. How do you want the
story to flow? The best stories weave threads. You move from one perspective to
another. You go from one point in time to another. You try to identify emotive moments
and you place them at strategic points. It’s basic storytelling. Except you need to support
the story with thoughtful and evocative visuals.

Q: How did the COVID-19 pandemic impact these films?

A: It had a greater effect on the Arcade project. When we made our plans and discussed
storylines for Arcade, COVID didn’t exist in our world. Then it changed everything. It
disrupted the Arcade supply chain. Workers had to quarantine at critical points in the
restoration. Dave Williams, the Arcade’s Senior Development Director, was hospitalized
with the virus. It became a major part of our story. It also complicated our recording.
Crawling around a hot, dusty construction site and shooting with a mask on wasn’t much
fun. Both projects were edited remotely. Usually, I’m sitting in the edit suite with Jason
Wilson, our editor, collaborating in person. To promote a safe environment, we used a
system that allowed the producers to direct the edit from a remote workstation.

Q: What’s some advice you would give to someone interested in filmmaking?

A: Watch programs that you might want to emulate. Watch critically. Look at how they
structure the story. Think about the visual treatment. Deconstruct it. Every part of the film
was deliberately assembled to build that story. When you clearly see how these elements
work together, you can start to imagine how you can create a story made of sound,
pictures and ideas.

Q: Now that Parts 1 & 2 of The Dayton Arcade: Waking the Giant are out in the world, can
you give us a taste of what we can expect to see in the final part of the documentary?

A: It’s really hard to convey just how much effort has gone into the restoration of the
Arcade. It’s been a labor of love. Soon that love is going to be shared with the public. I’m
excited to see people enjoying the beauty of that space. We’ll be there for the grand
openings, the weddings and other events. So while there’s plenty of work yet to be done,
our goal is to show those first breaths as the Arcade truly becomes a living thing.