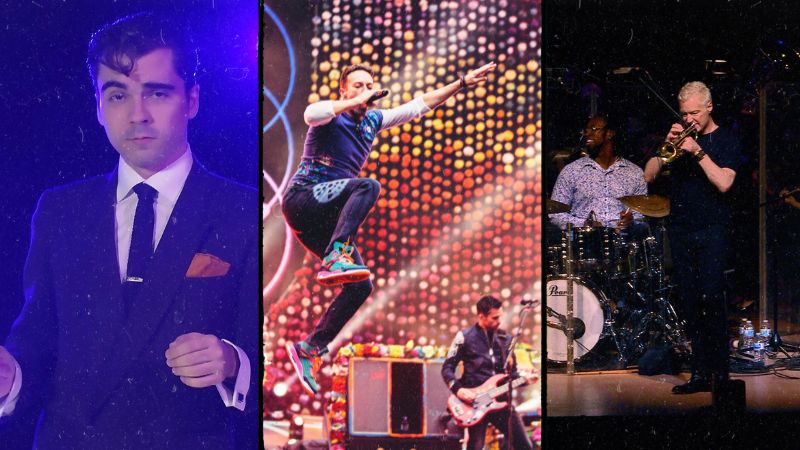 We are kicking off our August Membership Drive next week! From pop/rock to bluegrass to jazz, this drive has something for all music lovers! Learn more about upcoming programs like Coldplay: Live in Sao Paulo, Chris Botti & the Dallas Symphony Orchestra, Doo Wop, Pop and Soul Generations and more:

Grab a front-row seat at the legendary band’s A Head Full Of Dreams tour, which played to more than five million fans across five continents and featured a spectacular staging of their greatest hits and new favorites. Performances include “A Head Full of Dreams,” “Adventure of a Lifetime,” “Hymn for the Weekend,” “Up & Up” and “Everglow,” as well as hits from their earlier discography including “Yellow,” “The Scientist,” “Paradise,” “Clocks,” “Charlie Brown,” “In My Place,” “Fix You” and “Viva La Vida.” The show also features the band’s one-of-a-kind laser show, confetti cannons and awe-inspiring pyrotechnics.

When you support CET or ThinkTV, you will get The Butterfly Package 4-Disc Set (2-CD/2-DVD) and the Music of the Spheres (Recycled Vinyl LP). Learn more about the special on our recent blog.

Jazz trumpeter and multiple GRAMMY® Award-winner Chris Botti joins the Dallas Symphony Orchestra for an evening of jazz, pop and well-loved standards in this new concert special. Recorded live at the Morton H. Meyerson Symphony Center in Dallas, Texas, Botti and the DSO, conducted by Albert-George Schram, are joined by vocalists Veronica Swift and Sy Smith, violinist Caroline Campbell, guitarist Leo Amuedo and saxophonist Chad Lefkowitz-Brown. Songs featured in this program include “Sevdah,” “When I Fall in Love,” “There Will Never Be Another You,” “Moanin,’” “Somewhere Over the Rainbow,” “In the Wee Small Hours,” “Embraceable You,” “Hallelujah,” “You Don’t Know What Love Is” and “Shining Star.”

When you support CET or ThinkTV, you can get a Chris Botti Love Songs CD, a PBS legacy tote, and PBS Solitude wireless headphones.

A sequel to the successful 2018 Doo Wop Generations special, Doo Wop, Pop and Soul Generations (My Music) celebrates the legacies of the great artists and songs of the late 1950s and early 60s following the birth of rock and roll and the explosion of rhythm and blues on the radio. This new concert special features the broadcast premieres of many original groups and new generation favorites that perform for sold-out doo wop, pop, and soul concerts nationwide.

When you support CET or ThinkTV, you can get a 4-DVD Set and a 6-CD Set.

CELEBRATION! is Patrizio Buanne at his best: 15 years of hits, laughter and dolce vita from the charismatic Neapolitan singer and entertainer, all captured in a fantastic feel-good concert filmed in South Africa in 2019. The concert includes many of his greatest hits, including “Il Mondo,” “Bella Bella Signorina,” “Mambo Italiano,” “You’re My World” and Patrizio originals such as “Forever Begins Tonight,” “Only Your Love Takes Me Home” and “Solo Tu My Baby.”

When you support ThinkTV, you can get the Patrizio CD + Celebration! DVD.

Last of the Breed

The treasure trove of honky-tonk hits and Texas swing tunes that turned the album Last of the Breed — by the legendary Willie Nelson, Merle Haggard and Ray Price — into a major-selling hit airs as a once-in-a-lifetime concert event. Taped on March 25, 2007, at the Rosemont Theatre in Chicago during the final performance of their sold out tour that played to rave reviews, Nelson, Haggard and Price (backed by GRAMMY Award-winning “Kings of Texas Swing” Asleep at the Wheel, led by Ray Benson, and Ray Price backed by his Cherokee Cowboys) deliver rousing performances of their greatest hits in the richest voices on this side of the Rio Grande. Their timeless music — warm yet gritty, powerful and honest — is bound to have viewers singing along from beginning to end.

Last of the Breed features the greatest hits of these Country Music Hall of Fame inductees, including “Okie From Muskogee,” “Pancho and Lefty,” “For the Good Times,” “Night Life,” “Crazy,” “Mama Tried,” “Always on My Mind,” “On the Road Again” and other hits.

When you support CET, you can get a DVD and 4 CDs.