“Filming Puppets in a Haunted Bowling Alley: The Intern Tell-All” 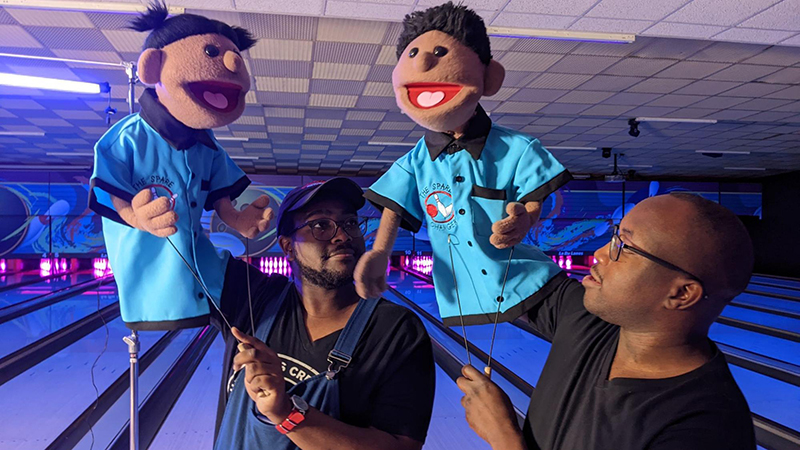 Let the record show that July 25th, 2022, was the most wholesome day of production this humble intern has ever witnessed.

It was still dark when I arrived at CET studios that morning for the third day of shooting for $martPath. Our previous two days were in the CET studios on a set in Studio B and in front of a green screen and awe-inspiring, selfie-worthy light set-up in Studio A. The third day was going to be very different.

That day’s on-location shoot at La Ru Lanes necessitated so much equipment that we used not one, not two, but three very large, CET logo-emblazoned vehicles. Once everybody had arrived, we began unloading the vans and setting up in the empty alley.

Ah, yes. My favorite activity of all – carrying heavy things.

As we transformed the bowling alley into a set, one of the owners of La Ru Lanes, John, took me and a fellow intern, Chloe, on a literal behind-the-scenes tour of the alley. Now I finally know what it looks like behind bowling lanes.

Then John mentioned the ghosts.

My curiosity thoroughly piqued, I listened to John and fellow owner, Kati, discuss the ghost they say inhabits a seat at the establishment’s bar, the shadowy figure that traverses multiple bowling lanes at night, an apparition dressed in white in one of the offices and more.

Sure, I wasn’t there to go ghost hunting, but maybe I’ll see if I can review our footage later just to make sure there aren’t any uncredited cameos…

Before the cameras started rolling, puppeteers Jordan Brownlee and Bakari Prigg took some time to warm up with puppets Timmy and Tammy. Ever accidentally make direct eye contact with a puppet? Yeah, neither had I until that fateful day. It’s as awkward as you’d expect it to be.

Jordan and Bakari also put on an impromptu puppet show for the talented child actors on set. I may have watched and laughed along with the kiddos, too – look, production can be stressful, but that doesn’t mean you can’t have fun!

Jack, another intern, was cast as a bowling alley employee for the episode. It was heartwarming to see another intern make his on-screen $martPath debut, and who knows? Maybe I’ll be blogging from the Emmys next year.

Chloe operated the clapperboard all day. They grow up so fast!

It was interesting producer Colin Scianamblo directing too. Believe it or not, there’s a marked difference between directing adults, the puppets often on their arms, and children, but I can confirm that Colin handled all three quite well.

That day, I taped curtains on ball racks and score tables, which helped hide the puppeteers during certain takes, and set the table for a pizza party scene. I also oversaw social media takeovers, although if you check out our social media pages, you’ll find that the awesome hosts basically took care of that themselves.

As the day went on, set lights and other equipment were moved from place to place, as was everything else, from production team members’ backpacks in the background to our entire soundbooth set up. Day became night thanks to *expertly placed* curtains over the alley’s doorways.

Sure, we were in a real-world location with plenty of sources of illumination, including glowing black lights and numerous sparkling disco balls, but if things were that simple, I wouldn’t be blogging about it. It’s not merely a matter of plopping a camera in an empty bowling alley at a clever angle. Throughout the day, the production crew had to put careful, deliberate thought into how they arranged scenes, making slight alterations as needed. And light makes the magic happen.

As opposed to my experiences on SHOWCASE with Barbara Kellar, The Baking Journal, and The Art Show, filming $martPath involves a lot of repetition from a lot of different angles with a lot of different set-ups – with only one camera. It’s dizzying.

Also, it’s harder to get a puppet to push money across a counter than you may think. Don’t take what you see on TV for granted, my friends.

It’s likewise mind-blowing (and cackle-inducing) that the puppeteers often stayed in character in between takes. The puppets were basically as alert and self-aware as you and me, interacting with the kids and answering in character when asked such questions as “Tammy, do you need a break?” by our production crew. I’ve never seen people stand in the middle of a bowling lane before, either, but I suppose there’s a first time for everything. I’m still wondering how they didn’t slip.

But off camera, kids are just kids. Off camera – and when not in character, of course – puppeteers are experts just practicing their craft. Off camera, puppets are really just toys. And off camera, there’s producers, production team members, interns, audio engineers, expertly-placed equipment, and a myriad of different snacks at craft services. Behind the scenes, it’s all just a workplace – although perhaps a little chaotic (and portable).

With that, I’ve found that sometimes, it can be easy to feel utterly useless on set. Sure, production is an intricate system that demands the participation of many, but occasionally there are times where you just can’t do anything but stay out of the way, especially as an intern. Maybe there’s a take and you’re not an actor, producer, or cameraperson, or the production team is discussing something that’s simply not your area of expertise. Of course I’m there to learn, but sometimes that’s not the right time to ask questions.

But that’s where learning – and the power of pure observation – come in, and what better place to observe than the filming of something meant to be watched? Being on this sort of set is an opportunity to find out where you can contribute, to have a chance to stand back and discover what makes you tick among a hodgepodge of tasks that need to get done, from pouring orange soda to moving sandbags to ensuring that puppeteers have time to rest their arms between takes.

At the start of shooting, one of the actors asked “Can we bowl with puppets?” I think it’s safe to say that a day of many takes amid the disco balls, glowing sneakers (the black lights will do that), efforts of our production crew, and puppet lip-synching confirmed that it was a “yes.”

This was not the last shoot I’ll be involved in, but this is the last blog post for the duration of my internship, an internship I could have written about on the daily had I not had, you know, actual other responsibilities. In the interim, I’ll continue to help where I’m needed, and although I won’t be publishing any more tell-alls about what I’m witnessing as my time at Public Media Connect comes to a close, for now, I’m content to just observe when the opportunity presents itself.