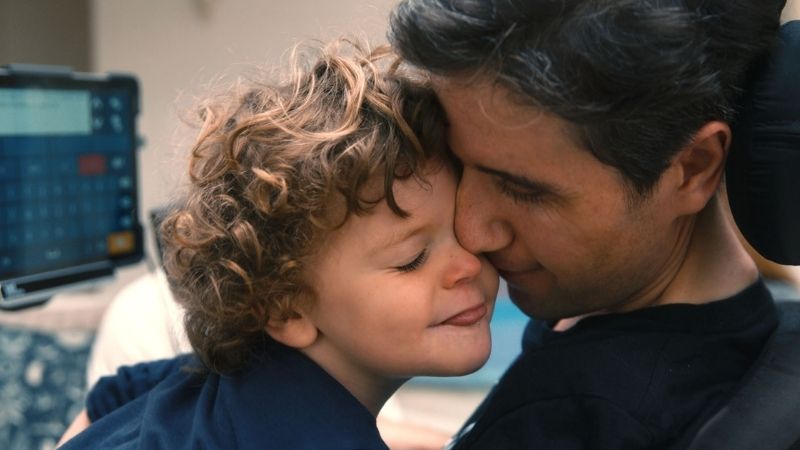 Ady Barkan was a 32-year-old rising political star and new father when he was diagnosed with Amyotrophic Lateral Sclerosis (ALS). After a chance encounter with a U.S. Senator on an airplane catapulted him to fame, Ady and a crew of activists started a journey across the country to ignite a movement for universal healthcare.

Not Going Quietly, a new POV documentary coming to CET and ThinkTV on January 24, is an inspiring and sobering story about disability, activism and family – and Ady’s fight for accessible healthcare.

Called the “most powerful activist in America, Barkan’s “Be a Hero” campaign landed him on Time Magazine’s list of the 100 Most Influential People of 2020 and a speaking spot at the 2020 Democratic National Convention. Prior to the convention, Ady interviewed the candidates vying for the party’s nomination about how they would address the nation’s broken healthcare system. And as millions still go without the medical care they need, those fighting for Medicare for all continually draw inspiration from Ady’s story.

“Not Going Quietly connects us with a brave and generous protagonist who, in the hands of these gifted filmmakers, becomes an active participant in the telling of his own story. Ady’s willingness to let us into his life, even in his most challenging moments, is an act of kindness and an invitation to solidarity. His spirit and courage are an inspiration and a reminder of our shared responsibility to care for each other,” said Chris White, executive producer, POV.

Not Going Quietly offers a nuanced look behind the scenes of Ady’s life and work as he navigates the successes and struggles of his fight for universal healthcare while dealing with ALS. Facing the loss of his natural speaking voice, Ady recognizes the power of his words and personal story to spark change, remaining committed to using his platform to advocate for others. Transformed by an illness that made strikingly clear how healthcare systems need fixing, Ady’s story is ultimately one of perseverance and hope, reveling in the possibility for change and the joy of solidarity.

Recently nominated for three IDA awards including Best Documentary Feature and the winner of the 2021 Audience Award at the SXSW Film Festival, Not Going Quietly also won the Special Jury Recognition for Documentary Feature for Humanity in Social Action, was nominated for two Critics Choice Documentary Awards and screened at the Tribeca Film Festival. RogerEbert.com called it “a shot of pure inspiration.” The documentary is directed by Nicholas Bruckman (director of La Americana, producer of Valley of Saints) and produced by Amanda Roddy.