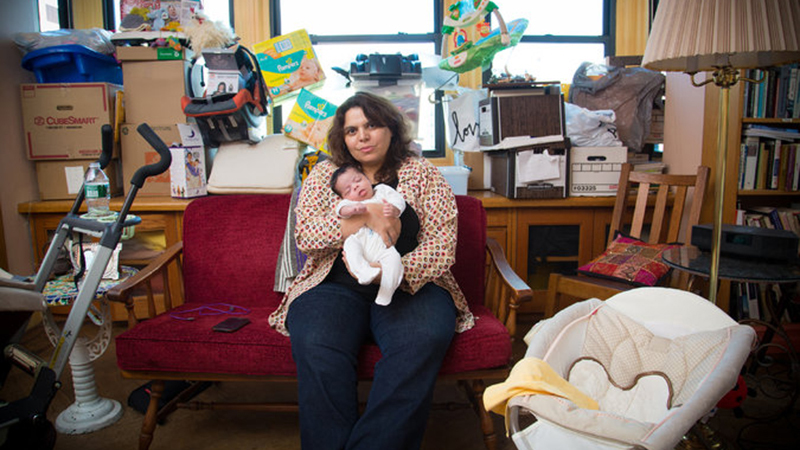 “How do you live without your mother?”

That’s the question filmmaker Judith Helfand asks twice in the new film “Love & Stuff,” coming to POV Monday, September 5, at 10pm on ThinkTV16, CET, the station livestreams and the PBS Video App. Seven months after helping her mom have a “good death” after being diagnosed with terminal cancer, 50-year-old Judith is selected to adopt a much-longed-for baby girl. With gallows humor and lots of heart, this multigenerational love story ultimately asks: what do we really need to leave our children?

The film opens one week of ritual mourning known as shiva when Helfand must come to terms with a new reality. She and her brothers begin the arduous task of going through all their mothers’ stuff – and the stuff their mom could not bear to part with belonging to their dad – generations of family photos, Judaica and memorabilia. All of which her mother had wanted to go through with Helfand while she was alive so that her children would know what was what, who was who, and perhaps most important to her but never said outright: to help jumpstart the conversation about the end of her life and their life together as a family. While time is not on Helfand’s side, 25 years worth of archival family footage-turned-cinematic portal is – and in the wake of her mother’s death – it becomes a means of connecting the love to the “stuff” and one generation to the next.

Then, seven months to the day her mother died, when she is in the deepest of grief, Helfand gets the call that turns her into an instant “old new” [single] mom to a much-longed-for newborn. At nearly 50 years old, a half century older than her baby girl, that dreaded question, “How do you live without your mother?” takes on new meaning.

“Before the Covid-19 pandemic, my biggest fear and the thing I could not even let myself imagine, let alone find the words for, was to say goodbye to my mother and thank her for being so wonderfully loving, intuitive and warm. I also couldn’t fathom, as a family, helping help her live a very good death at home – an end of life of our own making,” Helfand said in a press release. “Now, in the wake of what I hope was the worst of the pandemic, I realize and fully appreciate what a miraculous gift my family and I were granted. Our face to face end of life was even accompanied by a face to face funeral, seven days of shiva, and a loving circle of friends and family. Launching this film now, while millions of people are suffering from unresolved grief because they did not get to be face-to-face with their loved ones at the end, and did not get to mourn in-person with community, turns the film, and the conversations and actions we hope it inspires, into an incredibly timely opportunity and privilege. My parents were avid “viewers like you” of PBS. Having Love & Stuff broadcast on POV here in New York on WNET, and across the nation, would have made them wildly kvell (Yiddish for “burst with pride”).”

The film will also be available to stream on the PBS Video App for 60 days following the premiere.