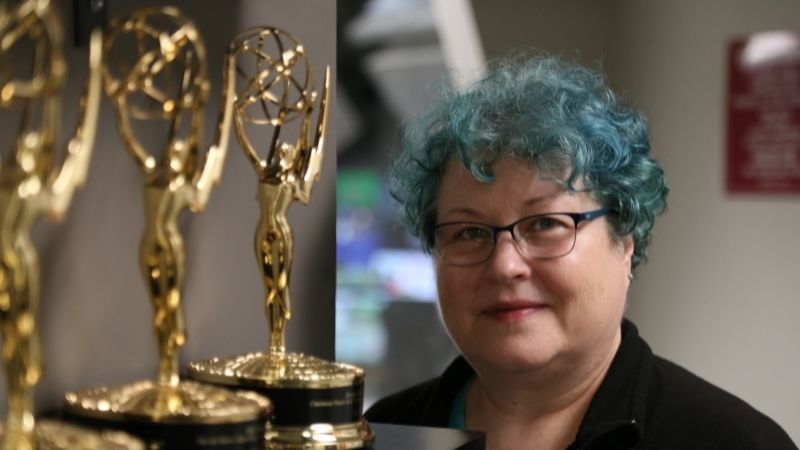 Ann Rotolante, lead producer of our locally-produced documentary Let Ohio Women Vote, has taken over the blog this week! Here, she discusses the most surprising thing she learned about women’s history after interviewing several scholars for the film. Check out what Ann has to say below:

After producing the one-hour documentary Let Ohio Women Vote, which tells the long history of the struggle for women’s suffrage in our state, I was asked many times by friends, family and co-workers: what’s the most surprising thing you learned from interviewing history scholars for the documentary?

I have a variety of answers to that question, depending on how much I want to share with the person asking. Most of the answers I give are fairly superficial, quick to convey and easy to digest, yet still important and heartfelt. But truly, the most surprising thing I learned had nothing to do with Ohio in particular.

Dr. Treva B. Lindsey, an associate professor at The Ohio State University in the Department of Women’s, Gender and Sexuality Studies, dropped this bombshell on me in the last few minutes of our interview back in May 2021:

“We’re still in a place in K-12 curriculum that we’re lucky if you get an image maybe of Susan B. Anthony or Elizabeth Cady Stanton as representative of the entire Women’s Suffrage Movement.”

That stopped me in my tracks and blew my mind.

I grew up in Miami, Florida. As a member of Generation X who was fortunate to have received an excellent Catholic school education (thanks Mom and Dad!), what I had learned in school about the women’s suffrage movement as a whole and the 19th Amendment in particular was minuscule. I can’t recall if I learned about Elizabeth Cady Stanton, but I do remember we talked about Susan B. Anthony. Maybe that was only because the Susan B. Anthony dollar coin was first minted and went into circulation in 1979, when I was in junior high. I remember it being controversial at the time that a woman – and an uppity one at that — would be featured on American currency. To many, it was the numismatic equivalent of putting a bra burning on the back of the dollar bill.

I don’t have children of my own, so I had naively assumed that social studies curriculum had evolved since the 1970s. We’ve had forty years to make progress, right? That’s plenty of time for curriculum to become more representational across the board. So when the cameras stopped rolling, Dr. Lindsey kindly continued to educate me about the lack of representation in K-12 curriculum. And then I did some research of my own, coming across a March 2019 article in Smithsonian Magazine that provided more detail. The following is liberally cribbed from that article.

In 2017, the National Women’s History Museum in Virginia analyzed the K-12 educational standards in social studies across the 50 states and Washington, DC and published their findings in a report titled Where Are The Women? They found that social studies curriculum covers 737 specific historical figures – 559 men and 178 women, or approximately 1 woman for every 3 men.

Almost 25 percent of the historical figures covered are women? That’s not a great ratio, but it’s still better than what I expected after my conversation with Dr. Lindsey.

But when researchers looked at the racial demographic of these 178 women, the deeper issues came sharply into focus. The demographic of these historical figures is 62 percent white. Only 25 percent of the women included are African American. And only one woman of Asian or Pacific Islander descent, Queen Liliuokalani of Hawaii, is included.

Additional concerns arose when they analyzed the roles of the women in the curriculum. Fifty-three percent of mentions of women’s history fall within the context of domestic roles, with women’s rights and suffrage making up only 20 percent of the mentions.

It is troubling that students who learn by the standards set by state education boards are not learning the broader impacts women have made on U.S. history. And it is clear that we must do better to educate students that women’s history and U.S. history are one in the same, and to ensure that our curriculum truly represents the diverse populations who trailblazed change.Let Ohio Women Vote rolls out statewide this March to commemorate Women’s History Month. I hope you take the time to watch live or stream anytime on the PBS App, on YouTube at https://www.youtube.com/watch?v=8iRFccsx_ss or online at https://watch.cetconnect.org/video/let-ohio-women-vote-qsgxsm/. If you do, I hope you gain a new appreciation of Ohio’s suffrage history and the diverse women who fought long and hard for access to the ballot. My wish is that you walk away having learned a few more names besides Susan B. Anthony and Elizabeth Cady Stanton.