The Biggest Dinosaur (and Bone) Featured this Week

Home » Blog » The Biggest Dinosaur (and Bone) Featured this Week 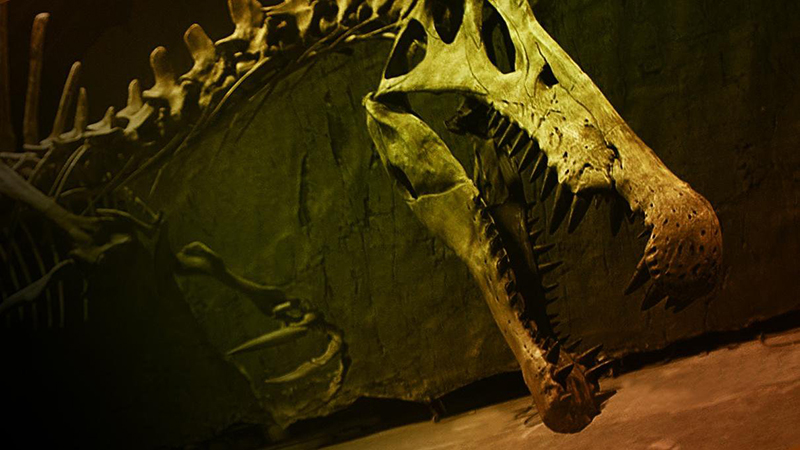 First we’re airing Nature: Raising the Dinosaur Giant at 8pm on Wednesday, December 11, at 9pm on CET and ThinkTV16. This episode of Nature tell the story of a shepherd who, while searching for one of his lost sheep, spotted the tip of a gigantic fossil bone sticking out of a rock. When the news reached paleontologists at the MEF Museum in Trelew, Argentina, they set up camp at the discovery site to examine it and look for more bones. By the end of the dig, they had uncovered more than 200 other huge bones. As the program reveals, these fossils came from seven dinosaurs, all belonging to a new species of giant plant-eating titanosaur.

Sir David Attenborough, the film’s host and narrator, takes us through the twists and turns of the forensic investigation to find out more about this new animal. He talks to paleontologists studying the fossils, along with comparative anatomy experts, and with the help of 3D scanning, CGI visuals and animation, looks at what the bones reveal about the lives of these dinosaurs. He’s on location at the dig site and in the MEF Museum labs in Trelew, and present when a life-size skeleton of the dinosaur, built by a Canadian and Argentinean team of model makers, is completed. Preview: https://watch.cetconnect.org/video/nova-bigger-t-rex-preview/.

Then, on the same day at 9pm on CET and ThinkTV16, we’ll be airing NOVA: Bigger Than T. Rex. Almost a century ago, paleontologists found fossil bones from a dinosaur that was bigger than Tyrannosaurus rex. The Spinosaurus fossils were destroyed in a WWII bombing raid. Now, the discovery of new bones in Morocco is reopening the investigation into this epic beast. Follow the paleontologists who are reconstructing this terrifying carnivore, a 53-foot-long behemoth with a huge dorsal sail, scimitar-like claws and superjaws. Bringing together experts in paleontology, geology, climatology and paleobotany, this special brings to life the lost world over which Spinosaurus reigned more than 65 million years ago: https://video.thinktv.org/video/nature-raising-dinosaur-giant-preview/.

These shows also will air Monday, December 16, at 8pm and 9pm on ThinkTV14.